In August 2011 my friend Stephen and I took our kayaks to paddle the Ladner marshes. These marshes are part of the Fraser river estuary before emptying into the Straight of Georgia, the body of water separating British Columbia's mainland from Vancouver Island.
Deas Island Regional Park is part of etro Vancouver's park system.  Not to be cofused with the City of Vancouver.
The island isn't really an island, it's connected to land. There's also a rowing club there with a convenient floating dock - that's where we put in.

West is where we were heading.  The weather really helped with mild temperatures and little wind.  We also lucked out as the tides for that day proved to be minimal. 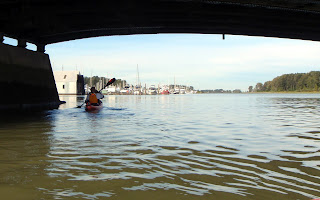 Immediatelly after the viaduct we took a sharp left into a slough. 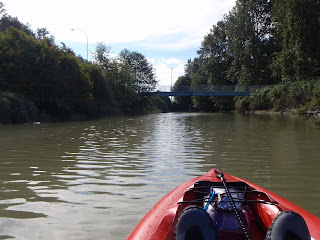 This slough had a pedestrian bridge crossing it. I realized we rode our bikes many times over this bridge on our way to the Rusty Anchor pub. The food isn't bad there, although service can be a real hit and miss - typical for most restaurants. 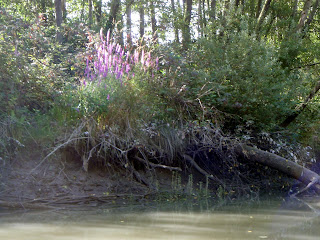 These  fowers were the only touch of colour around.  Actually the place felt a bit depressing with its grey and stagnant water. Not the kind of place to go for a swim in. 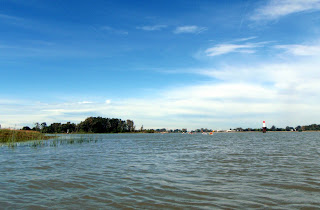 We paddled back out, and found ourselves on one of the river's main channels.  Some interesting river grasses - on the left. 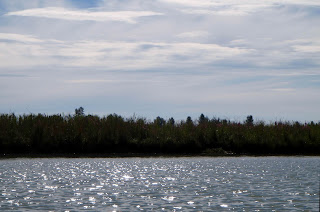 Grasses are really cool.  We were hoping to find an opening through these grasses going into a slough. 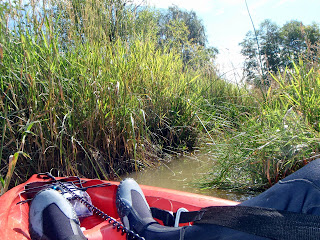 At last we found one. Initially this slough was quite wide and easily navigable, then as we got deeper in there, the waterway became a lot nerrower; to the point that I was getting a bit concerned about being able to turn around to get back out, even with my short Safari.  Stephen though, didn't seem too worried. 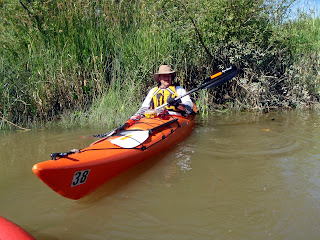 He was right.  Once in while things open up to give us more room to manuvre. 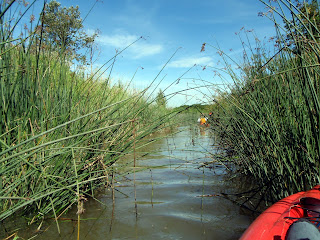 I like this shot.  There wasn't a single animal to be seen.  I thought there would at be some birds or fish, instead nothing. 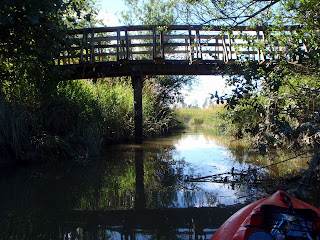 Suddenly, we went under this pedestrian bridge.  It must be part of some marsh boardwalk network.  It would be interesting to visit this place on foot as well.

A GPS would have been useful; not just to know where we went, but also to help retrace our way back to the river.  These little bodies of water go everywhere and it would have been aggravating if we would have had trouble finding our way.

After getting back to the river our route took us further west towards our lunch destination in Ladner. 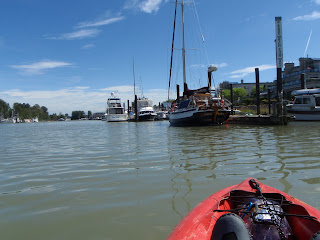 A little more paddling to the floating dock. 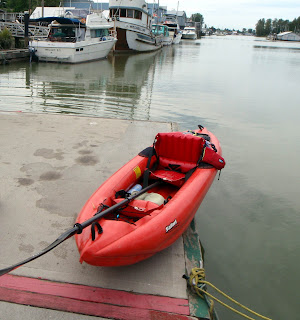 Took the Safari out and secured it to a post. I fortgot to mention the new Sunny seat I installed to replace the kayak's standard pillow type seat.  This is a great improvement in confort - no more sore back or legs going to sleep.  I wish this upgrade was available for the Safari.  I was lucky Innova had one last old style Sunny seat to give me.  The newer Sunny seats aren't compatible any more - different attachment setup.
Lunch was spent at Ladner's well known Sharkey's Seafood Bar & Grill, literally a few steps from the dock.  We were too busy eating to remember to take pictures.

Then we retraced our steps back to Deas Island.  This time we paddled all the way without stopping and made very good time, even considering there was a weak current flowing against us.  It was fine paddling. 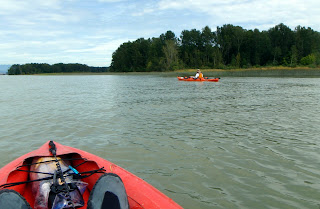 Of course the last part of the trip hasn't been recorded at all.  No pictures.
But it was fun; the conditions were perfect, not much current and just a few other boats.  We did manage to see two other inflatable kayaks thought.  People are starting to notice them.
All in all, a good day.